I really dislike doing things which appear to have no point. Like paperwork that seems redundant, mopping the floor just to have juice spilled…again, or sitting on the phone and punching in numbers to finally get through to an operator that asks you to repeat everything you just entered. Am I the only one?

Does your life ever feel like it has no point? Or do your struggles, gifts or point of view feel like they are all for nothing?

As we journey through the first five chapters of John, we meet two people who were probably asking the same questions. And we’re going to go through them in reverse order that they appear, so hang on all you OCD people 🙂

If you turn to John 5, we are taken to a pool called Bethesda near the Sheep Gate. Basically, this gate was where they brought the animal sacrifices into the city. The belief about this pool was that from time to time an angel of the Lord would come down and stir up the waters. The first one into the pool after each such disturbance would be cured of whatever disease he or she had.

In verse 5, we meet a paralytic who is says had been an invalid for 38 years. It doesn’t say he was 38 years old, but that he had been an invalid for that long. He probably had friends or family members who helped him to and from the pool each day. So this man, went there day in and day out with the hopes that each day might be the day that he could somehow, someway, get himself into the pool when the angel of the Lord stirred up the waters.

In verse 6, Jesus asks him a question, “Do you want to get well?” Now doesn’t that seem like a silly question. Of course this man wanted to get well if given the opportunity. But let’s look at what his response is in verse 7.

“‘Sir,’ the invalid replied, ‘I have no one to help me into the pool when the water is stirred. While I am trying to get in, someone else goes down ahead of me.'”

He obviously had very little hope and considered himself destitute and could it be possible that sounds to me like he was a little bitter. Can you imagine sitting there day after day? I’d probably be a little bit bitter too. Wouldn’t you be?

But Jesus doesn’t let him stay in that place. Verse 8, ” says ‘Get up! Pick up your mat and walk.’ At once the man was cured; he picked up his mat and walked.”

Now bear with me while we jump back to John chapter 4. In this chapter, Jesus meets a woman at a well. No big deal right?

I bet you’re wondering what a Samaritan is, right? The best definition of Samaritans I could find was this note in my ESV Inductive Study Bible : After the Assyrians conquered the northern kingdom of Israel, they “imported” people into Samaria. Some of the Jews married these importees. Their offspring were called Samaritans. When the Jews returned after the captivity, the Samaritans wanted a share in rebuilding the temple but were rejected because of their pagan practices. Their enmity continued through the time of Jesus.

Jesus meets her there, and tells her of her life, which would cause me to pay attention too. In verse 16 he asks her, “Go call your husband and come back.”

“I have no husband,” she replied.

Jesus said to her, “You are right when you say you have no husband. The fact is, you have had five husbands, and the man you now have is not your husband. What you have just said is quite true.”

Something to keep in mind about this woman was the fact that she had probably been married five times for survival alone. In those days, if a woman was not married, she became a burden to her father’s household and was probably encouraged to marry again. Also, keep in mind that the life expectancy was not what it is today, so one or more of her husbands probably passed away.

So when Jesus met her at the well, she was visiting the well during the hottest part of the day to avoid the other women of the town because of her current living situation and probably had nothing to do with her past. It was the living in sin with an unmarried man that she was ashamed about. What a lonely existence she must have had. She was trying to hide, but Jesus didn’t let her.

Now put yourself in the shoes of the paralytic man and the Samaritan woman. I wonder if they felt like their lives were pointless, mundane and redundant. Can you relate? Maybe your problems or situations aren’t quite as dramatic as theirs, but sometimes our lives of kids, laundry, sleep, repeat, laundry, work, sleep seem to be going on and on for no point.

John 1:3 tells us that “Through him all things were made; without him nothing was made that has been made,” and down in verse 10 it says, ” the world was made through him.”

I believe that He ordained them and created them for those specific moments in time. He created this man and this woman to shine His glory, to point others to Him and to testify about what He did for them.

The Samaritan Woman probably felt her life was one big twisting turn she was put there to experience, but her encounter with Jesus and testimony led to this in John 4:39-41, “Many of the Samaritans from that town believed in him because of the woman’s testimony, ‘He came and told me everything I ever did.’ So when the Samaritans came to him, they urged him to stay with them, and he stayed two days. And because of his words many more became believers.”

And in John 5:15 it says, “The man went away and told the Jews that it was Jesus who had made him well.”

Jesus took the stories of these two individuals and used them for these specific times. Could he have reached those people in a different way that could have bypassed the suffering and turmoil that these two people had experienced? Absolutely. But He didn’t. He chose to involved them. He chose to use them, to give them purpose, give them a testimony about Him that others would listen to. He chose to not leave them where they were after their encounter with Him. 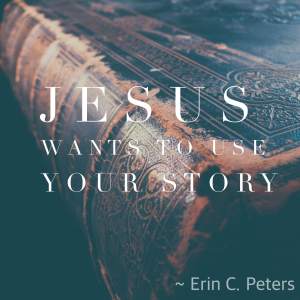 And He has created you for the same thing. Whatever you are going or have gone through. Whatever struggle, past, present or future, Jesus wants to use your story. Christ, who was there when the earth was formed has put you in a place for such a time as this.