Welcome to Exploring the Book of Galatians – Chapter 5! I’m so proud of us for reaching this point. We are on the home stretch, my friends. I don’t know about you, but I’m just blown away with all the information packed into this short little book.

Let’s take a look at Galatians 5:1: It is for freedom that Christ has set us free. Stand firm, then, and do not let yourselves be burdened again by a yoke of slavery.

This verse is, in some ways, a summary of the entire book of Galatians.

A few weeks ago, my kids checked out a book from the library by Joni Eareckson Tada. I just so happened to be in preparation for this study and was struck by the vivid picture of what Galatians 5 is discussing.

Let me share with you a summary of On the Wings of the West Wind.

Marcus was a slave. For as long as he could remember, chains had torn at his wrists and ankles, and he had never been able to see or hear clearly. It was the same for all the other slaves in the field. The only reprieve from their meaningless work of moving rocks and dirt was when the west wind blew giving them a feeling of freedom.

One day when the west wind was blowing, freedom felt very close to Marcus. He turned towards it to see the figure of a boy with no chains on.

The boy said, ” I have come on the wings of the west wind, carrying a message from my master, the King. He has sent me to tell you the good news: ‘You shall know the truth, and the truth will set you free.’ Do you wish to be free?

Marcus could see and hear the boy so clearly and wanted so badly to be free, but looked sadly at the chains around his wrists and ankles. But then the boy extended his hand, and Marcus slowly reached for it. To his surprise, his chains fell off!

The boy and Marcus ran to the gate in the stone wall that separated the fields of the wicked master from the green pastures of the good master, the King.

There were many free people to welcome Marcus, as well as the King, waiting with open arms. The King reminded Marcus that he had eyes to see the truth and ears to hear the word of the King.

One day, when west wind was not blowing, the King was nowhere in sight and his friends had gone on a journey, Marcus decided to peek through the gate in the stone wall. To his surprise, the voice of the wicked master demanded Marcus return to the dirt fields and put his chains back on.

Marcus felt he had no other choice. He fell to his knees, reaching for the chains. The wicked master, who loomed dark and frightening, yelled at Marcus to put the chains on.

But then Marcus felt the west wind blowing and he could hear faintly the voice of the King: “The truth will set you free.”

The wicked ruler continued to bellow at Marcus, but did not strike Marcus as he used to. That was when Marcus realized that he really was free. It didn’t look like it, it didn’t feel like it, but that didn’t change the truth that he was free. At that realization, all fear left.

Marcus stood tall and told the wicked ruler that he held no power over Marcus anymore. At that, the wicked master back off and turned like a coward slinking away from the face of courage.

Marcus ran toward the gate in the stone wall where his master, the King was waiting to embrace him. The King spoke kindly to Marcus, gently reminding him that the stone wall could not keep out the voice of the wicked ruler, but that Marcus was indeed free. The one catch was that he had to make a choice to live free.

The King then handed Marcus a scroll that read:

Friends, just as Marcus was freed from slavery by the truth, we have been given our freedom through Jesus.

Jesus’ entire mission here on earth was to free us from the chains we were born into; the chains that kept us from really living.

But what did Marcus learn? He could lose his freedom very easily. It was a slippery slpe for him to peek through the stone gate, back at where he had come from. He felt the same emotions and feelings come over him when the wicked master ordered him to put the chains on.

Despite the amazing freedom Marcus experienced, and the freedom experience, it can easily slip through our grasp, just as it had with the Galatians.

Free believers in Christ must be diligent in standing firm.

Be on your guard; stand firm in the faith; be men of courage; be strong.

Whatever happens, conduct yourselves in a manner worthy of the gospel of Christ.

“Despite the fact that we already have been saved by Christ, we must be continually diligent to remember, preserve, rejoice in and live in accord with our salvation. We cannot lose our salvation, but we can lose our freedom from enslavement to fear.”

Friends, this is not something we can afford to avoid. I want to invite you to take 10 minutes to get alone with the Lord. Ask Him to reveal any fear or areas of bondage in your life. Any areas where you need to stand firm and steadfast in the truth of the Gospel.

Cling to the truth of what Christ has done to free you from your chains.

Know the truth and live by it. 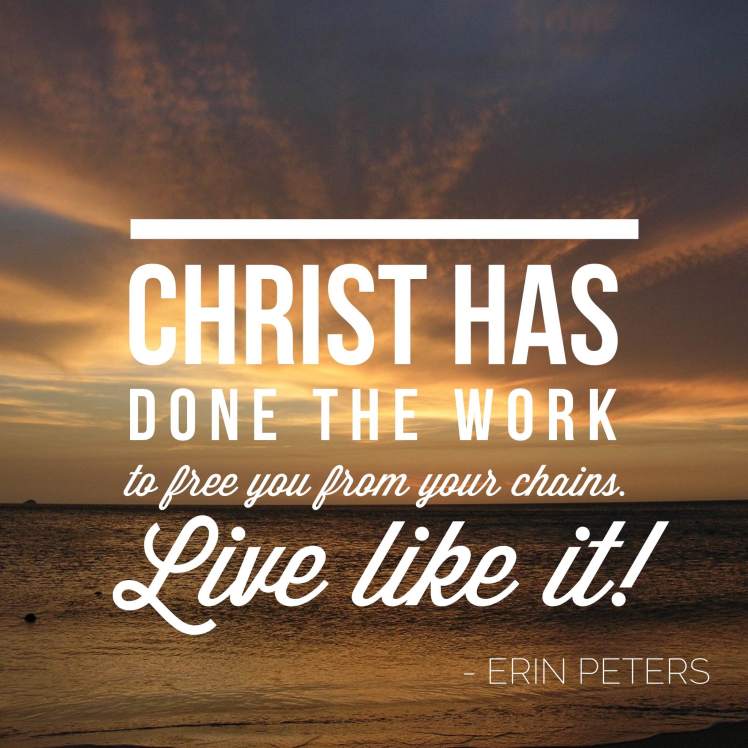