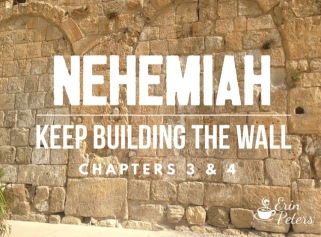 In today’s lesson, we’re going to mainly focus on Chapter 4.

The sections of wall had been assigned. The work was actually happening. They had to rebuild, they must rebuild. As long as the walls lay in ruins, the name of God’s was being brought shame.

This was their inspiration.

Nehemiah had called them to action. He gave them a purpose and a plan to make it happen. They were inspired and knew it could be done because they were working for the Lord.

But then Sanballat of Samaria started ridiculing and mocking.

“What are those feeble Jews doing? Will they restore their wall? Will they offer sacrifices? Will they finish in a day? Can they bring the stones back to life from those heaps of rubble—burned as they are?” – Nehemiah 4:2

You’re weak, your task is impossible, and God isn’t going to see you or help you.

Awesome! Just the kind of “pep talk” that everyone wants to hear when they start something new.

The opposition was not just scornful, but powerful.

Whenever a work of God is begun, in heart or home, Satan uses the method of scorn.

The people were working hard, pouring themselves into the work of the Lord, and building as if they truly were going to build it in a day.

Satan didn’t like it, so he roused the attack of the enemy.

He never bothers with half-hearted Christian people, but once you are desperate for God and become burdened for the work of God, then you will feel the opposition of hell.

But when Sanballat, Tobiah, the Arabs, the Ammonites and the men of Ashdod heard that the repairs to Jerusalem’s wall had gone ahead and that the gaps were being closed, they were very angry. They all plotted together to come and fight against Jerusalem and stir up trouble against it. – Nehemiah 4:7

They had no excuse or reason for not wanting the walls of Jerusalem rebuilt. They had no logical reason and no sound argument against it, which made them angry.

And what we see here is mutual enemies have become mutual friends because in their determined effort to stamp out a work of God. We see that so much in our modern day. So many groups/organizations/governments seem to be united in attacking God, His truth and His people.

So what do we see Nehemiah do against all this opposition? He didn’t panic or get worried. He didn’t answer back or retaliate.

He did three things.

So we built the wall. And all the wall was joined together to half its height, for the people had a mind to work. – Nehemiah 4:6 (ESV)

What a magnificent statement. Nehemiah continued to lead the building and ignored them.

The kept their focus and concentration on the thing that God had called them to do.

Have you ever been doing something that you knew, without a doubt, that God wanted you to do it, but then something/someone started opposing you? It’s so easy to mope, or gossip, or whine or lash out. What a great example this group of wall rebuilders is for those of us with a tendency to take opposition to heart.

It’s seems that the higher they built the wall, the more their hearts turned toward God.

But the people not only had a mind to work, but they also had a heart to pray.

A mind to work, a mind to pray, and an eye to watch:

“…and posted a guard day and night to meet this threat.” – Nehemiah 4:9

Nehemiah was a practical guy. He had such a great balance of focusing on God’s task, giving the task to God in prayer, but also taking into account the tangible organizational needs and requirements of the job at hand.

He made sure that a guard was always posted on each section of the wall to be on guard for an unexpected attack from their enemy.

Scorn of the work of God is usually the first trick Satan uses.

Jesus suffered this kind of thing as well. Those who hated each other, conspired together to kill him. (Pharisees, Saducees) Even to the point that the very Roman government that the Jews were praying the Messiah was going to overthrow, was where the Pharisees and teachers of the Law turned to when they needed someone to actual sentence Jesus to death. (Luke 23:12, 23:35-37)

The Lord Jesus overcame for us:

When they hurled their insults at Him, He did not retaliate, when He suffered, He made no threats. Instead, He entrusted Himself to Him who judges justly. – 1 Peter 2:23

He continued right up until the end, when He cried “It is finished” because He knew because of the work He had done, from that day on, heaven would be opened to every guilty sinner who comes to God through faith in the sacrificial atoning blood of Jesus.

Jesus also praying, even sometimes through a whole night. We read this in the gospel of Luke:

And being in anguish, He prayed more earnestly, and His sweat was like drops of blood falling to the ground.” – Luke 22:44

How We Should Overcome Opposition

Have this attitude in yourselves which was also in Christ Jesus, who, although He existed in the form, of God, did not regard equality with God a thing to be grasped, but emptied Himself, taking the form of a bond-servant, and being made in the likeness of men. Being found in appearance as a man, He humbled Himself by becoming obedient to the point of death, even death on a cross. – Philippians 2:5-8

In the Christian life, if we have no mind to pray, we have no mind to work. Have you noticed what your life is like when you don’t pray? Do you get irritable and critical, judgemental and mopey? I know I do. Prayer is sometimes the only thing keeping us focused on God’s will.

And the peace of God, which transcends all understanding, will guard your hearts and your minds in Christ Jesus. – Nehemiah 4:7

What a wonderful gift it is to know that we can put our trust in Jesus to guard over our hearts. If we believe in Him, He will bring us a peace that no one can comprehend.

There is the victory, my friends. The victory is in our Lord who has experienced every opposition and temptation, yet He remained sinless.

Satan will do everything he possible can to defer and distract us from the work of God. Unfortunately, he usually succeeds at keeping the walls are called to rebuild broken down by only throwing simple scorn and sarcasm our way.

So keep building your wall.