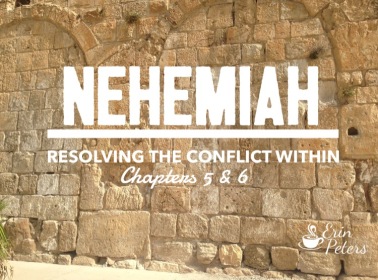 lcome to Week 3 – Resolving the Conflict Within

After college, I moved in with a very good friend of mine and we lived together for a couple of years. She decided to move, so I ended up living with two girls who I didn’t know very well.

I enjoyed living there with these girls. They were fun.

After about 6 months I started losing clothes. I quizzed my sisters on the weekends when I went home, thinking one of them had confiscated my favourite shirt. When they denied it, I talked to the downstairs tenants that we shared the laundry room with no luck, and I asked my roommates. No one had my clothes.

I seriously thought someone was breaking in to our house and taking my stuff.

Not until I noticed my grad hoodie on my roommates’ floor when I came home sick from work one day did I think she could be lying to me. She said I had left it on the couch and she accidentally tossed it in to her room.

That was my first hint that something was wrong. One day when she was gone I went in her room and there were all my missing clothes.

What a terrible sinking feeling it is to have someone you trust betray or steal or lie.

Last week we looked at threats and attacks coming from the outside. This week, we see that there was a threat within the people themselves.

So what we have here is some of the returned exiles being forced to mortgage their property in order to raise money for the heavy taxes imposed by the king.

This mortgaging would have involved temporarily giving up the use of their property as well as any harvest to the wealthier people who could afford the taxes.

And they were also being forced to give their children as slaves to their fellow Jews.

Some of these practices were allowed under certain restrictions and guidelines in the Mosaic Law, but the charging of interest and taking the slaves and changing their identity was again the law of Moses. If you want to take a closer look as some of the Mosaic Law they were breaking, turn to Detueronomy 15:1-15.

And to make matters worse, there was a drought in the land. Between the taxes, the drought and the time taken out to rebuild the wall, the poor were completely overwhelmed.

Needless to say Nehemiah is angered and outraged when he hears what is going on, but he does not rush in to point fingers and judge.

In verse 6 & 7 we see that he was angry, but  despite that, he stopped took time to evaluate the situation and then he approached the nobles with his charges in private.

Then he called a great assembly of the people and brought the charges against them, and also challenged them to make it right.

Let’s take a look again at what Nehemiah has to say:

“We, as far as we are able, have bought back our Jewish brothers who have been sold to the nations, but you even sell your brothers that they may be sold to us!”

How did the nobles react? They were silent.

This is what the Lord says:
“For three sins of Israel,  even for four, I will not relent.
They sell the innocent for silver,  and the needy for a pair of sandals.
They trample on the heads of the poor as on the dust of the ground and deny justice to the oppressed.
Father and son use the same girl and so profane my holy name.
They lie down beside every altar on garments taken in pledge.
In the house of their god they drink wine taken as fines.

Could it be that he had gone along with what was going on until it was pointed out to him?

How did Nehemiah deal with conflict?

This chapter shows us subtle problems, but also reveals a preview of later deeper problems.

So what does this have to do with us today?

We never have conflict or oppression or wrongdoing, do we?

This should be where there is nervous laughter.

Friends, we live in a day and age when conflict is at an all-time high. Everywhere you turn there is conflict. Politics and religion are still the main area of debate in our world and there doesn’t seem to be an end in sight.

All of those definitely fit the criteria for conflict, oppression or wrongdoing.

But what about on a personal level: in church, in your family, or your friendships.

Is there someone you are in relationship, whether it be your spouse, a friend or a co-worker, where you are oppressing or treating them wrong in some way.

Is there anyone you are putting in a box?

Or maybe you are on the side of the one being put in a box or having expectations heaped upon you that you never asked for? Will you step out like the Jews who were poor did and say something? What if they hadn’t told Nehemiah what was going on?

What about the way we view God? Are we at conflict with Him because of how we are living or even how we view Him? Maybe today you need to stop and spend some time evaluating how you think of God, which then alters how you pray and live your life.

Ladies, we all have areas, like Nehemiah and the nobles, where God needs to intervene. Maybe you need Him to give you the courage to stand up for injustice. Maybe you need to change how you are treating some of the people you are in relationship with. Maybe you need to just spend some time getting to know God so you have a more accurate understanding of who He is.

Regardless of where you are today, I’m so thankful we have a God who will walk through conflict with us. Remember this:

Therefore, since we have a great high priest who has ascended into heaven,[f] Jesus the Son of God, let us hold firmly to the faith we profess. For we do not have a high priest who is unable to empathize with our weaknesses, but we have one who has been tempted in every way, just as we are—yet he did not sin. Let us then approach God’s throne of grace with confidence, so that we may receive mercy and find grace to help us in our time of need. – Hebrews 4:14-16